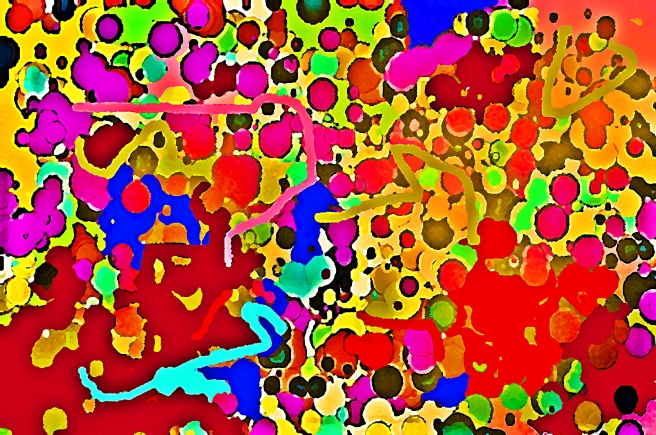 The Pollock is a rather obscure and fairly eccentric poetry form invented by poet and art critic John Yau to pay tribute to the American abstract expressionist painter Jackson Pollock. It is a fourteen-line poem with the rather unusual requirement that the first line must be a quotation by the artist. The remaining thirteen lines consist strictly of words from Pollock’s quote, the idea being to splatter words repeatedly on the page like he famously did with paint on his canvases. Although the form might sound restrictive and totally wacko, I actually found it a real blast to write. Interestingly, another one of the rules of writing a pollock is to break the rules any time you feel like it (much like Pollock did with his painting). So it is more than permissible to substitute one of your favorite quotes by someone else for the Pollock quotation (perhaps even a clever quip by a poet that was previously posted on this blog). However, in my attempt which you will find below, I decided to stay a purist, and utilize Pollock’s response during an interview when asked “How do you know when you’re finished painting?” He simply replied, “How do you know when you’re finished making love?”:

So what do you think of the pollock? Is it a form you would like to try or wouldn’t touch with a ten-foot pole? Ironically, for a poetry form inspired by a visual artist, I personally feel (that because of the repetition of words and its resulting musicality) pollocks sound much better read out loud than they look written on the page. Keep that in mind if you do decide to write one (perhaps you can read yours at a local poetry open mic, something I honestly believe that every poet should do every once in a while).

Paul Szlosek was born in Southbridge, Massachusetts, but currently resides in the nearby metropolis of Worcester. He was co-founder and host of the long-running Poet’s Parlor poetry reading in Southbridge and Sturbridge, as well as a past recipient of the Jacob Knight Award for Poetry. His poems have appeared in various local publications including the Worcester Review, Worcester Magazine, Sahara, Concrete Wolf, and Diner. He’s probably best known in the Worcester poetry community for his fanatical obsession with obscure poetry forms, and has invented his own including the ziggurat, the streetbeatina, and (most recently) the hodgenelle. View all posts by Paul Szlosek

This site uses Akismet to reduce spam. Learn how your comment data is processed.